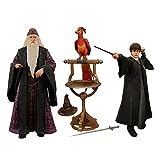 Product Description
No student at Hogwarts will want to miss out on this action figure two-pack! Featuring a young Harry Potter in his second year at Hogwarts and an Albus Dumbledore figure, these figures are based on the actor likenesses from Harry Potter and the Chamber of Secrets, the second film in the popular series! The Albus Dumbledore figure features the likeness of actor Richard Harris, the first time a figure has been sculpted based on the original actor. Each figure stands approximately 4′ tall and comes with movie-accurate accessories…. More >> Harry Potter and Dumbledore Year 2 Box Set